Stuart and I arrived in Constable Point a couple of weeks ago, but I have only just had time to start this blog. It's been a busy time. We had a day in Akurayri in Iceland before we flew and had a half day skiing. An experience to ski in Iceland – lifts opened at mid-day and then closed a few hours later due to wind, leaving the baby lift open.

I was straight out the next day leading the Skidoo team putting a group of 12 French military people to a point in Liverpool Land about 50kms away. The weather was closing in and the strom hit the very next day.

We had a broken drive belt at the camp which was soon fixed. It's good to have Karl, who is our new mechanic looking after the skidoos. We have never had one before and he has already fixed a number of problems to keep the machines running.

Shipping containers kitted out with insulation and heaters are cramped, but warm. Two people are comfortable, but 3 - 4 are a bit cozy.

The storm lasted for about 3 days and gave us loads of time for getting inside jobs done. The Weather Haven tent our kit store,workshop, kitchen, living area and sleeps 2. Adrian has also just built an inside loo in the new porch by the door so we don't have to go outside. It's still just a bag in a bucket, but a great improvement to getting lost in a blizzard.

At times the visibility was down to 3mts with winds of up to 60kph. The poor snow blower froze up in the spindrift and we never got it going again until after the winds died down.

The snow blower took a day to clear the front of the containers. A job that used to take several days for 4 people.


The first job to tackle after digging everything out of the snow again was to move 36 barrels of Jet A1 from our camp to the airport to lay fuel depos on the Greenland icecap for a vehicle traverse for 'Arctic Trucks'. It took just half a day with a team of 6 and three skiddos. 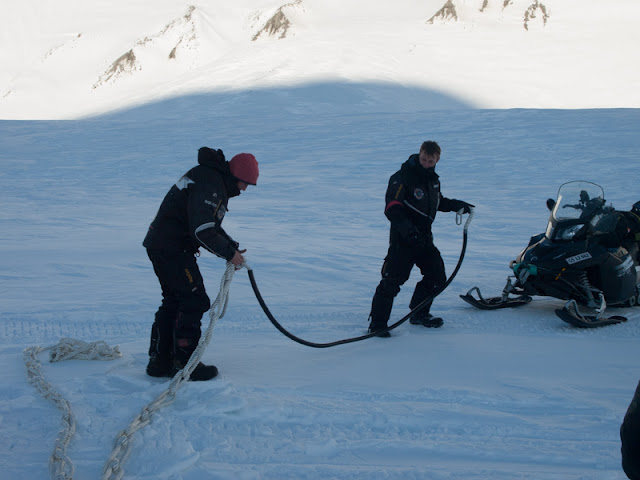